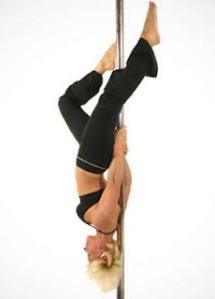 Now, you may be wondering, why the lengthy title?  Why not just ‘try to pole dance’?  Well, like many of my misadventures, this one began with a deal that I purchased with a couple of neighbourhood friends last summer.  Who knew that I would end up breaking my ankle a mere 7 days later?  Sometimes, life just doesn’t quite unfold the way you think it will.  And that’s precisely where you find its charm.

Since the vouchers were good for a year, it gave us plenty of time to embrace the idea of wrapping ourselves high up around a pole, and then squeezing our thighs together with all our might, in a desperate attempt to keep ourselves from falling on our heads.  All of a sudden, Suzanne Somers’ Thighmaster didn’t seem so silly.

These shoes were made for dancing…

In fact, I was a bit surprised at just how many of my friends were keen to try this form of ‘sensual exercise’ as it came up in conversation.  I mean, it did look like excellent value on cyber-paper:  a 1-hour class on ‘The Exotic Art of Pole Dance’, plus a 1-hour life/love reading session, all accompanied with complimentary hors d’oeuvres for a mere $49 (retail value $230).  But there was no denying the facts:  I was becoming a puma in what was revealing itself to be a pack of slightly intimidating cougars.  This class was destined to be unforgettably hilarious, and at the same time, more than a wee bit scary.  Gentlemen, you’ve been warned.

Eventually, my ankle recuperated well enough that it was time to unleash our inner divas.  The schedules were consulted, phone calls were made, and the evening was booked, albeit somewhat arbitrarily.  You see, the deal had evolved slightly over the past ten months, in that the tarot card readers were long gone, the instructor was new, but no worries, the class would merely be extending by an hour or two to make up for it.  This should have been my first clue that something was amiss.

But that thought quickly faded as it suddenly dawned on me:  sweet jayzus, this was actually going to happen!  Then, just as swiftly, one of my flirty cohorts injured her back, and the other one, her hip while running.  Apparently, this whole getting un-younger business is downright bad for our stripperella selves.  No worries, though, I found two substitute vixens eager to take their places.  It was on. 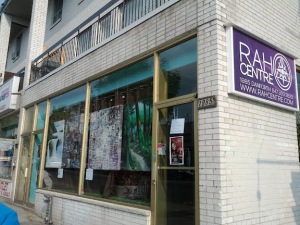 The next major hint that all was not exactly as it should be arose when I left the studio a couple of messages to confirm the class start time (you know, details) and to see if there might be room for more of my hellcats to attend the class with us; however, they failed to call me back.  While I did find this a teensy bit suspicious, I just shrugged if off, and thought to myself that it’s hard to find good help these days.

So this evening, after a warm-up glass of liquid courage at home, we arrived in front of the RAH Centre in our finest sexy workout gear and requisite high heels only to find this message taped to the door: “Closed until further notice.  Sorry for the inconvenience.”  WTF?!!?  Surely, you jest.

All dressed up with no pole to climb!

So we did what any Sex-less in the City girls would do in this situation, after doggedly trying all the doors and windows, which raised at least one eyebrow from a nearby neighbour, and dragged our dumbfounded diva selves across the street for a drink at the ‘Groove Bar and Grill‘.  Clearly, we needed to debrief and dispel some seriously pent-up feline energy.

Kudos to our waiter, who managed to hold his own, and even concocted a few delicious cocktails for us to help mark the occasion.  He informed us that the studio had been closed like that for about a week and a half, as far as he could tell. 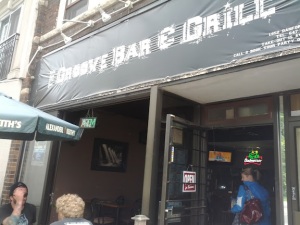 His empathy did not go unrewarded, as we ordered a second, and possibly even third round.  I mean, we weren’t supposed to be meeting anyone until at least 8:30 pm, at the earliest.  It just seemed like the best possible use of our newly freed-up schedule.

So, where do we go from here?  Good question.  There is no doubt that this class will happen sometime this year, just, in all likelihood, at a different venue.  As for the vouchers, I will be contacting the deal site, as I smell a refund in my near future.  At least, that’s what the crystal ball whispered to me from the billiards table.  It’s all good!

Join me in trying a new thing every day at https://itsallnewtome.com/
View all posts by LaLa →
This entry was posted in Fitness, Fun and Crazy and tagged Crazy, Danforth, deal, exotic art of pole dance, fitness, Fun, Groove Bar and Grill, May, pole dancing, RAH Centre, Toronto, voucher. Bookmark the permalink.

4 Responses to Day 86: Try to Take a Pole Dance Class.