So much goodness under one roof!

It’s no secret that I love food.  And the more bite-sized, flavourful taste sensations that you can put on a table full of friends, accompanied by some good wine, the better.  Spain, in my humble opinion, has got this particular gastronomical art form perfected – and it’s known as tapas (or pintxos, depending on the region).  With a bountiful selection of produce available such as can be found at the 12th century Boqueria market, inspiration is always close at hand.

Having spent a good deal of time in Spain over the years, primarily in Barcelona, I have had a chance to sample many of these tasty concoctions, and have been rarely, if ever, disappointed.  If you like something, great – order another!  If not, well, no big deal – it was just a mouthful anyway.  For the commitment phobes in the crowd, this is the Rolls Royce of dining – it simply doesn’t get any better than this.

Step inside and prepare to be dazzled!

So I burdened myself shortly after returning to this fabulous city to see if I could enjoy a meal consisting entirely of brand new to me tapas.  While the enormity of the task seemed daunting at first (oh the hardship!), I felt confident that the friendly bartender at Divinus was up to the challenge.

First up?  A gorgeous ‘bite’ of smoked salmon stuffed with goat cheese, skewered with a giant prawn and cherry tomato served on a canapé toast.  Smoked salmon is surprisingly not very common in this country, which is pretty well the only reason I can think of that I had not come across this particular combination before.  Don’t worry, it was accompanied by a delicious glass of vino tinto.  Divinus is a civilized institution, after all.

Next up was an incredible platter of monkfish carpaccio.  Yep, you read that right.  I’m glad that it’s not my job to slice the raw monkfish so incredibly, delicately thin without tearing it, because let’s face it – my patience does not lend itself in that particular direction.  It came with some small, canapé crackers and olive oil to allow you to be the artisan of your own individual bites.  I did not shy away from the task.  This was hands-down the best thing I ate over the course of the evening, basket of bread aside. 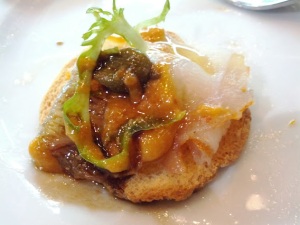 Third offering was a little bit out there – razorback clams.  These particular shellfish are not for the faint of heart, and are an acquired taste.  Being a fan of calamari, octopus and eel already, I managed to enjoy the elongated creatures that were well steeped in garlic butter.  My dining companion, however, gave them a pass.

All in all, I hope you managed to savour these joyful bites of deliciousness vicariously through my photos, and perhaps get inspired to try a few bite-sized creations of your own.  Accompanied by a yummy bottle of Rioja, of course.  Saludos!

Join me in trying a new thing every day at https://itsallnewtome.com/
View all posts by LaLa →
This entry was posted in Food and Drink and tagged Barcelona, Divinus, Drink, Food, June, la Boqueria, Spain, Tapas. Bookmark the permalink.

2 Responses to Day 103: All New Tapas in Barcelona.