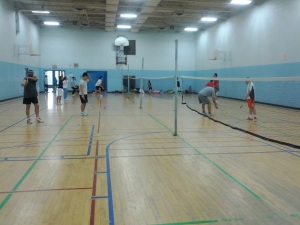 Getting back into the swing of things.

A good friend had been trying to drag me out to play badminton with her for months now, and tonight, we finally made that happen.  You see, I used to play the sport über-competitively back in the day, but when you use an expression like that, you know it has been longer than you care to remember, and it kinda makes you unsure whether the levels of embarrassment and frustration will be worth the effort of becoming the Comeback Queen.

I must admit, maybe the most fun I had was watching the encouraging faces on the regulars there when my friend told them that I was brand new to the game, and then having them congratulate me, saying that I had real potential.  Ya, it’s pretty much a slam dunk at this point that my cohorts and I are all going to hell, and, as another one of my friends puts it, it’s now just a matter of seating arrangements.  But I digress. 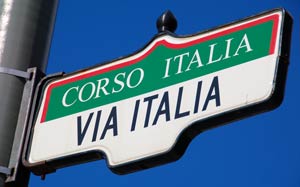 Where we were playing was at the new-to-me Joseph J. Piccininni Community Recreation Centre at St. Clair and Lansdowne, on the border of Corso Italia.  My relic of a racquet held up decently, helping me to win almost all of my games, even without the luxury of proper court shoes, an ankle brace, a consistent swing, or even a basic understanding of the twenty-one point scoring system that was awarding a point to one side with every single rally.  Oh, how times have changed. 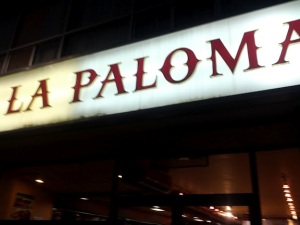 Quite possibly the best part of the evening, though, was the post-gym visit to the conveniently located La Paloma Gelateria & Cafe right next door.  Nothing says time to reward yourself for sweating buckets quite like a cold bite of heaven served in a waffle cone of sugary goodness on a hot summery night.  Did you know that the current version of gelato was invented by the Chinese, who passed it to the Arabs, who passed it to the Sicilians, who, if you ask them, perfected it?  True story! 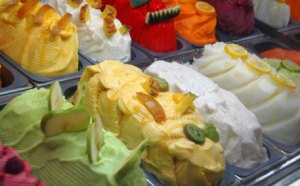 How do they get all the happiness inside?

After waiting behind a couple of customers who were clearly picking out china patterns that they would have to look at every single meal for the rest of their lives, I ordered the limoncello gelato.  It was divine!  Although, paying retail was a bit of a shock to the system.  Why oh why did I not have a voucher for this?!?  It really did seem like a bit of a racket to me – or should I say racquet.  But what price happiness, especially the kind that comes in a cone full of instant gratification.  Oh tasty treat, forgive me, as you are most definitely worth it!

Speaking of vouchers, the other new thing that made its grand debut in this hodgepodge of a day was the Mini DV Video Camera that I had purchased on a deal way back in February (for $35, retail value $70).  I finally broke down and had to read the manual that came with it, which was written in Chinglish, to get it to work, where I discovered the maximum size of the micro SD memory card it could handle was 16 GB, so the 32 GB I had inserted was blowing its proverbial mind.  Ah, details.

While its compact size is indeed handy, without a viewfinder, it is going to take some practice to capture anything other than the sky and my toes, as you can see in this teensy clip (now edited using iMovie, also a first) taken outside La Paloma.  My first short film… Enjoy!

Join me in trying a new thing every day at https://itsallnewtome.com/
View all posts by LaLa →
This entry was posted in Fitness, Food and Drink and tagged badminton, deal, Drink, fitness, Food, gelato, May, mini digital video camera, Toronto, voucher. Bookmark the permalink.