Oh yeah, I could totally picture myself cruising on a motorbike down the open road, without a care in the world.  Now that sounds like freedom to me!  …For like five minutes.  Then I would want to meet up with my friends on a patio for a cold drink.  Then maybe ride again.  Decisions, decisions!

To allow this dream to blossom into even a hint of reality, I attended a 3-hour ‘Get Your Feet Wet’ Motorcycle Training Clinic today, offered by Learning Curves Foundation.  It appealed to me on multiple levels; namely:  one, it just looks so freaking cool.  Two, it’s always good to learn something new – you never know when this kind of skill might come in handy.  I mean, let’s just say I run into Brangelina, and they need someone to drive their bike while they’re standing on the back, climbing onto a ladder hanging from a chopper while they’re warding off aliens with a bazooka.  It could happen…  And three, at some point, if I do ever want to own a scooter in the Vespa category to get around the city, there’s this itty bitty law type of thing that apparently states that you need to have your motorcycle license.  Whatever. 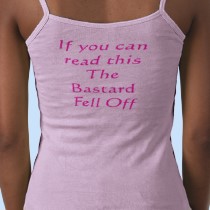 I mean, I’ve ridden on the back of a motorbike several times before, but to be in the driver’s seat – that is definitely new territory!  Before hurtling myself down the full road of getting licensed and buying a helmet, let alone getting a bike and insurance and all of that, I considered it kismet when one of my beloved deal sites offered an introduction to the basics of motorcycling, which would confirm whether or not it really was everything I hoped it would be.  Naturally, I jumped all over it. 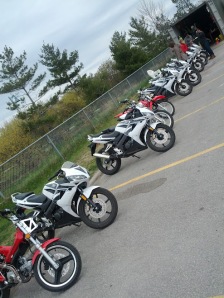 I was positively giddy by the time I arrived at the clinic, which was smartly held in a large parking lot devoid of pedestrians and other moving vehicles, cordoned off by giant orange pylons.  There were about ten of us newbies, and two instructors.  After getting all the necessary gear and uber-important waivers signed, we started with the fundamentals, like how not to look like a dork when moving a bike (the ‘duck walk’ is so not cool).  We also practiced our form and balancing on a bike while being pushed around by a fellow participant making vroom-vroom noises.  Next up was actually how to start it, and to get a feel for the friction zone.  We then learned a very handy mnemonic that soon became rote:  C-KNIFE.  Choke, Kickstand, Neutral, Ignition, Fuel, and Engine.  These are all the necessary tidbits to check before you can get your motor running. 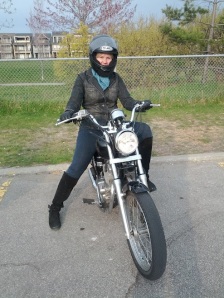 Finally, we got to start the bikes up, open up the clutch, and test out the brakes.  I’ve never really been a fan of brakes, as they seem to want to hold you back from exploring new territory.  I really liked the throttle, though.  That’s like the gas pedal.  Kick ass!  We spent the remainder of the clinic practicing starting and stopping, and trying to maneuver our way through s-turns at slow-ish speeds.  We got to try out 4 different models and styles of bikes, which was super fun and interesting.  No real surprise, I suppose, but I loved the biggest one.  It just seemed to be the most comfortable…  Although the ‘crotch rockets’ (their term, not mine) were chomping at the bit to take off, and made me feel the need for speed, which, I suppose would be a teensy bit dangerous in the long run…  Probably?

The good news is that this intro clinic counts towards the full licensing course should we wish to enrol.  For the life of me, I can’t think of any good reason why not to!??  How I wish I had tried this sooner!  I’m thinking of sending the short video one of the instructors took on my phone of me on the bike course to my mom for Mother’s Day.  Is that wrong?  I suppose time will tell…  Be safe out there!  Peace out.

Join me in trying a new thing every day at https://itsallnewtome.com/
View all posts by LaLa →
This entry was posted in Educational, Fun and Crazy and tagged April, Crazy, deal, Educational, Fun, Learning Curves Foundation, motorcycle clinic, voucher. Bookmark the permalink.