There are only a few months during the year that seem to be jam-packed full of birthdays, and March is one of them.  So, to all of my Pisces and Aries friends, this one’s for you.

I took another one for the team by attending a Basic Introduction to Cake Decorating class this evening at Sugar Tiers in Markham.  Oh yes, all of those hours dutifully spent watching confectionary masterpieces being carefully constructed while the clock was ticking away on Food Network Challenges was finally going to pay off!  Assuming watching and actually doing are the same thing…?

The workshop was led by award-winning pastry chef and instructor extraordinaire, Rosalind Chan.  My fingers are slipping a little on the keys as I type this, from playing with all the buttercream and fondant tonight.  They also still smell of delicious sugary goodness, despite having been licked and washed numerous times.  Problems to have, I know!  The best part, though?  The event was 75% off due to another incredible deal purchase!  It’s truly astounding how much money I’m saving here, although I suppose there is a trade-off with all of the calories being consumed… wait, what I am saying?  I got cake, so I’m clearly way ahead!  But I digress.  As I do, where vouchers are concerned.

The class started with about a 10-second introduction by Rosalind (“You can read about me on the web – the clock is ticking!!”) – lady, I like your style.  Our stations were well-equipped, and after briefly introducing ourselves, and being shown a few important tips and techniques, we were let loose to embellish our soon-to-be works of art.

The first lesson involved trimming the basic cake itself to make it level, and slicing it in the middle, in case we wanted to fill it with a layer of buttercream.  Apparently, this was optional, and, much to my amazement, there were actually a few nut jobs in the class who didn’t do this bit!  That’s like taking the caramel out of the Caramilk bar.  Without it, you have nothing but a hollow shell of mediocrity.  Where’s the love, people? I shake my head.

Next, we were shown how to carefully fill a piping bag with buttercream, and were able to practice making rosettes, stars, and seashells in case we wanted to decorate our cake the ‘old-fashioned’ way, like they do in a lot of mass-producing bakeries. 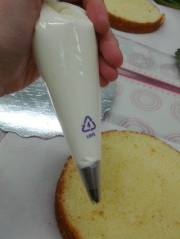 I actually seemed to do pretty well at this part for whatever reason.  Maybe because it was essentially a useless skill in the grand scheme of things.  Hard to say.

Then we had to coat our cake with a thin layer of buttercream to act as the ‘edible glue’ for the fondant.  This is called crumbing.  Huh.  I always thought that was when you emptied the bottom tray from the toaster.  The things you learn. 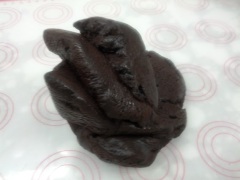 This is not a turd.

Now came the really fun part – playing with fondant.  That’s the thick pasty stuff you often see covering wedding cakes, which has substantially widened its appeal in the last decade or so.  But first, a couple of disturbing facts about fondant:  it’s a bit of a PITA to make, and it can keep for up to two years in a sealed plastic container.  Which means that almost no one makes their own fondant anymore; instead, fondant is bought in bulk in a variety of colours and flavours, then shelved, from where it is used only as needed.

…Sorry, forget that last bit.  Focus on the positive!  Fondant is curiously fun to work with.  You have to beat the heck out of it, sort of like kneading bread dough, or slapping around a suspect, to get it to cooperate.  Then you roll it.  Now, if you are making fondant for a round cake, you would roll your fondant out into a circle.  If you are making fondant for a square cake, you would roll your fondant’s corners out to keep it rectangular.  If you are me, however, you roll your supposedly round fondant into an ink blot.

The good news is that you are given a pizza cutter to trim away the excess, so nobody ever has to know about your special, uh, talents.

We are shown several other uses for fondant, including ribbons, ropes, cutout shapes, bows, and the all-important rose.  These last two involved more focus and patience than I could muster, so I improvised, and am extremely pleased with the result.  The real piece de resistance, though, came when Rosalind pulled out the airbrush gun – for real!  The spray of fairy dust indubitably took our cakes to the next level.  Even Tinker Bell would be proud.  Can you spot the difference? 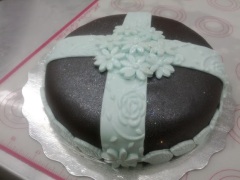 I think it’s fairy-ly safe to say that I thoroughly enjoyed the workshop.  This was extremely good value for the money, and something that I feel confident I could replicate again on my own.  Hmm… Maybe Duff and the rest of the crew at Charm City Cakes could use a helping hand?

And with that, I leave you with these words of wisdom from another good Aries friend of mine:  Dessert is not for sharing.  Bon Appetit!