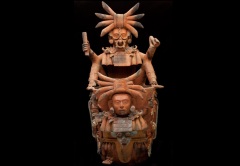 I noticed the other day that the Maya exhibit at the Royal Ontario Museum (ROM) is closing April 9th.  That’s like, soon.  So I thought I would go check it out today to determine the likelihood of the world actually ending this December, to see if I should take out a few more credit cards or maybe even a loan, because then I wouldn’t have to worry about paying them off.  Then I started thinking about how big of a boat did I really need, versus how big would simply be excessive?  And could you pay for a personal chef with a line of credit?  And what should we have for our last supper on Dec 23rd, or thereabouts?  And who should we invite??  So many questions!  And, once again, I found myself in LaLa-land.  To be fair, it’s a short trip.

Now, I know the city is still divided about the crystal addition to the ROM building, but personally, I’m a fan of juxtaposing the old with the new.  This particular appendage kind of reminds me of the Fortress of Solitude in the original Superman movies, although I’m pretty sure that wasn’t the architect’s inspiration…  Hmmm, maybe it’s just me? 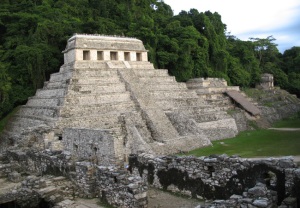 Anywho, the entrance to the Maya: Secrets of Their Ancient World exhibit is adorned with a large video projection of some of the grandest Mayan sites, accompanied by a musical sampler to help transport you all the way to Central America, back in the day.  From there, you weave through several rooms that include things like an insight into the ancient city of Palenque, the Mayan belief in the cosmos, the written language depicted in glyphs (apparently the hiero- is now silent), numerous antiquities and video presentations, the Mayan belief in the after-life, and the abandonment of the Mayan jungle cities around the 9th century.  Oh, and did I mention the notorious calendar, complete with a countdown to December 23rd, 2012?  Yup, that’s in there, too. 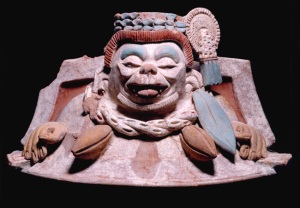 One of the highlights for me included how the Maya believed in the occasional sacrifice and bloodletting to keep things running smoothly and their deities appeased, just like in Joe versus the Volcano.  This included carving a stingray spine to pierce, um, delicate members of the ruler, and to run a rope through the tongue of the ruler’s wife, with the goal of soaking some cloth in better quality blood that could then be set on fire, because apparently Mayan gods had a delicate nose and could tell the difference in the calibre of the resulting smoke.  Right.

However, the most startling part of the exhibit in my opinion was a video presentation where one of the curators addressed the question of what really happened to the Maya as a people.  His answer echoed many of the current conditions, including environmental and social issues, such as the population losing confidence in the ruling 1% elite, who controlled the majority of the wealth.  This brings to mind the old adage about those who fail to learn the lessons of the past being doomed to repeat them.  In the immortal word of Homer J. Simpson, ‘Doh!’ 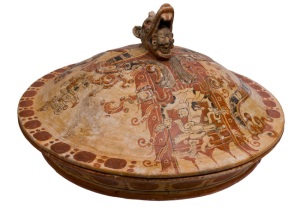 I’ve got nothing to hide but some hot tamales!

Of course, descendants of the Maya people can still be found in parts of Mexico, Belize, El Salvador, Guatamala and Honduras today, so they haven’t completely disappeared, they’re just a little more, well, scattered.  But they’re working hard to preserve some of their ancestral languages and customs, which is always nice to see.

All in all, it’s a decent exhibit.  Now for the spoiler alert:  if you have already bought your 2012 doomsday kit and can’t find the receipt, then I would suggest you stop reading here… To the rest of you, I would give that extra line of credit a pass, unless you have the means and intention to repay it, because there is no real evidence that the Mayan believed the world would end this year.   It’s just the end of a big calendric cycle.  I know, it’s a bit of a letdown… But you can always go for a nice cup of Mayan hot chocolate to cheer yourself up.  Bless them, they did give us that!

Join me in trying a new thing every day at https://itsallnewtome.com/
View all posts by LaLa →
This entry was posted in Educational and tagged April, crystal, Educational, Maya exhibit, ROM, Royal Ontario Museum, Superman, Toronto. Bookmark the permalink.