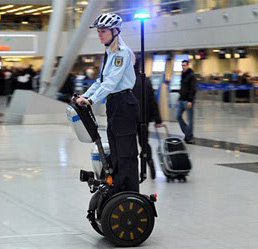 Happy April Fool’s Day!  I hope your day was as much fun as mine, riding around on a segway, not to be confused with a segue, its homophone, which this is.  (Sorry, couldn’t resist that little spin…)  The only time in recent memory that I recall seeing a segway up close was in the Barcelona airport, where a couple of local police officers were riding them, and I needed to borrow one of their cell phones.  I must admit, they struck me as a bit odd, like the first time I saw a police officer on a bicycle.  I mean, if push comes to shove, I’m thinking the suspect is going to get away.  They just don’t strike me as all that particularly powerful or intimidating.  Maybe it’s the helmets, hard to say. 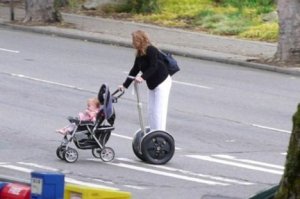 My perception today, however, was completely shattered, when I used a couple of my precious vouchers to take a segway for a spin in the Distillery District with LeLa.  These babies rock!  I totally want one for myself now.  Can you imagine going through the grocery store, or Costco with one of these?  Heaven!  Mind you, there’s probably a few places that they’d give you the hairy eyeball if you used them, like on the golf course or at the gym.  But those small-minded people just don’t get what the segway represents.  From walking the dog to playing a riveting round of segway polo, it’s a lifestyle choice. 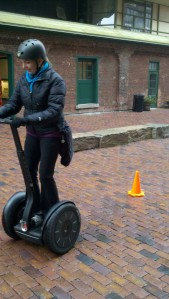 Our tour started with the uber-important task of choosing a helmet – after all, safety first.  Always one for fashion over function, LeLa opted for the one with the bad ass sticker.  It seemed appropriate.  Then came the basic orientation to ensure that we didn’t topple over at the first shiny object in our path.  In addition to simply standing on it and dismounting, this consisted of being able to go forwards, backwards, and around a few puny pylons.  Having a background in skiing or skateboarding where you have learned to be comfortable on an unstable platform definitely gives you an advantage, so I took to it like a duck to water and was raring to go after a couple of minutes.  LeLa, on the other hand, took a little longer, but then we were on our way.

Luckily for us, the weather had turned today, and was reminiscent of an average day in Ireland – namely, blustering with intermittent showers and a bitterly cold breeze.  That meant that we ended up with a private tour, which was just as well, because our guide had his hands full with me trying to ascertain the top speed of these things, and LeLa essentially re-routing us by refusing to go up hills – initially, at least.  Ah, good times!

But our guide Jason was the epitome of patience and grace, and he kept rounding us up and plying us with interesting tidbits of info about the Distillery’s history, no doubt in an effort to distract us into some form of civil obedience.  The Distillery District has a bit of a sordid past, which some purports has made the premises haunted, including the fact that one of its founders, Mr. Worts, committed suicide after his wife died in premature labour by drowning himself in one of the wells on the property.  His brother-in-law and business partner, Mr. Gooderham, then kindly adopted Mr. Worts’ six newly orphaned kids and raised them along with his own brood.  Those were the days… I mean, who does that, even then?!!?  Someone with plenty of easy access to alcohol, apparently.  But I digress. 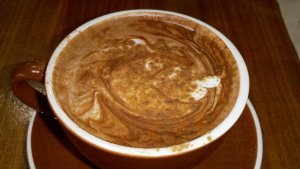 In any case, the tour was both super fun and entertaining, and I was delighted to learn that they also offer off-road segway adventures in the summer, just north of the city in Horseshoe Valley.  Apparently, I was alone in my enthusiasm, as LeLa could barely walk by the end of the tour, having clenched her calves practically for dear life to ensure her feet didn’t move to keep her from toppling over.  In any case, we finished the trip with a visit to Soma, where I warmed up with a mug full of their Mayan hot chocolate elixir.  Mmmm… Yummy delish!  How do they get all the happiness inside?

PS. Because I have no shame and will do anything for a giggle, enjoy these two random segway pics I found on the glorious information superhighway! 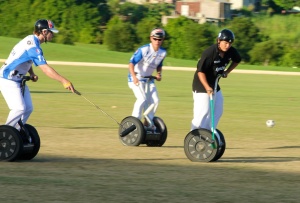 Victory shall be mine! 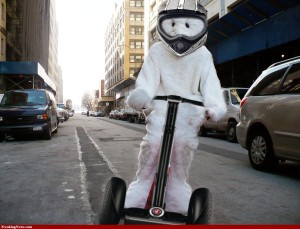 Who you calling Fluffy?

Join me in trying a new thing every day at https://itsallnewtome.com/
View all posts by LaLa →
This entry was posted in Fun and Crazy and tagged April, Crazy, deal, Distillery District, Fun, Gooderham and Worts, Mayan hot chocolate, segway, Soma, Toronto, voucher. Bookmark the permalink.