Today, I boarded a Viking Splash Tour to get in touch with my inner buccaneer.

Our departure was initially short-lived, as our guide/driver/captain Paddy (naturally), soon discovered the brakes were, well, um, missing.  But no worries, he regaled us with stories of the vehicle’s origins while a new water-bus came to collect us, and so, about 10 Irish minutes later, we were once again on our way.  As always in Ireland, safety comes first.  Except when it comes to the ridiculous posted speed limits (aka unreachable targets) on the narrowest, windiest back roads you’ve ever seen… But I digress. 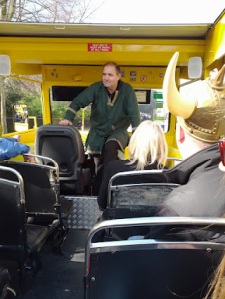 I gleaned all kinds of pearls of wisdom from our captain, who has clearly kissed the Blarney Stone more than once, as he indeed has quite the gift of the gab.  It was apparently the Scandinavian Vikings (like Eric the Red, I imagine) who were responsible for bringing the infamous ginger hair to Ireland, and that the amphibious bus is called a DUKW, which was built by women at General Motors during the second world war, and was only intended to last about a year (ours was 7 years old, which may at least partly explain the disintegrated brakes).  I also learned that when our captain gave his wife a glass of wine the other day, she said “I love you”, to which he replied, “Really? I love you too, dear”, and she remarked, “I was talking to the wine”.  Oh yes, the Irish do enjoy their story-telling.

So the tour continued, and with the addition of a few giant pontoons, plus lifejackets for us not-so-hardcore Vikings, the DUKW ‘splashed’ into the water in the old reservoir which is now known as the Grand Canal Docks.  We got to see where U2’s recording studio is located, along with the Facebook and Google offices, plus the 8 million Euro landscaping and art installation of ‘trees and grass’ that has left more than a few Dubliners reeling.  Turns out that Celtic Tiger was much more of a kitty cat with a fur ball.  I personally kind of like the project… but I’m not the one still paying for it. 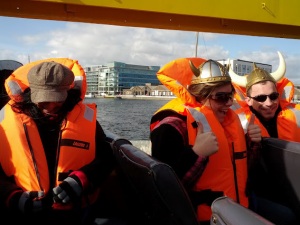 Overall, I thoroughly enjoyed the tour, thanks in no small part to our very entertaining guide.  If you ever find yourself in Dublin in need of a way to terrify random pedestrians with a hearty yell and a not-so-incognito getaway car, then this is absolutely the tour for you!  Just remember to dress warmly, as I froze my proverbial butt off (not to worry, it followed me home).

Join me in trying a new thing every day at https://itsallnewtome.com/
View all posts by LaLa →
This entry was posted in Fun and Crazy and tagged Blarney Stone, Crazy, DUKW, Fun, Ireland, March, Splash, Tour, Viking. Bookmark the permalink.